This is the first of my TM Wissen features that was aired in the (second) episode of the show and one of my favourites so far.

Russ Strand is an engineer by profession, but an amateur rocketeer out of passion – as a member of the United Kingdom Rocketry Association (UKRA), we accompany him on his journey to his final practical test in rocket certification – launching his 3.5 meter long, 0.3 m wide rocket at an amateur rocketry convention near Cambridge. 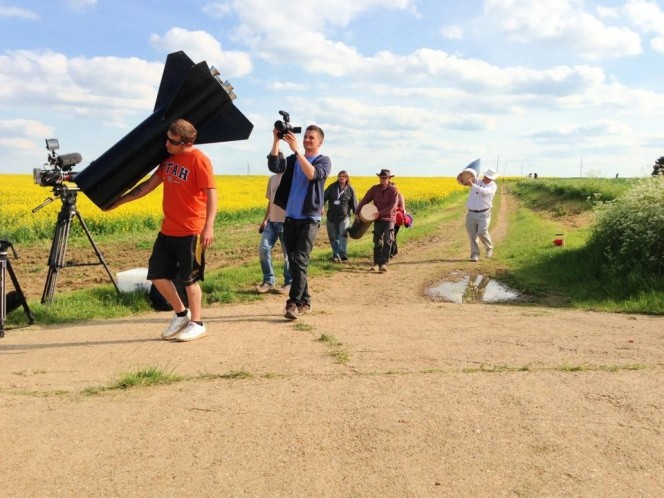 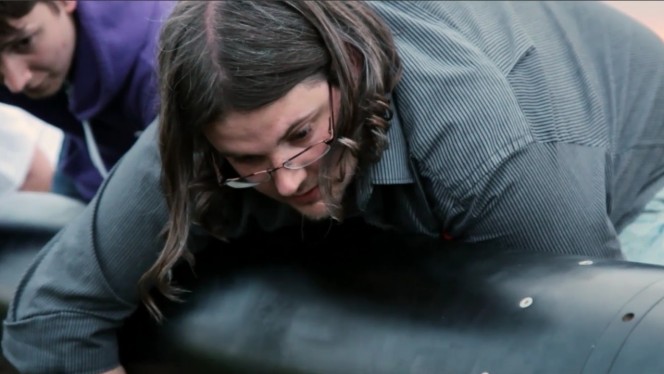 Russ is one of the most lovable people I had in front of my camera so far – when we arrived at the house he was building his rocket in, he had barely managed to sketch out the shape of the rocket he was going to build – with less than 48 hours to go before his rocket launch at the annual rocketry event near Cambridge, where he would compete to get his level 3 certification for amateur rocketeers. He was understandibly severely stressed on that day and had a million things to go through and build – and that he did indeed. Despite the enormous pressure he was under, Russ was extremely cooperative with us. And if you have ever had to work with a film or TV crew as the protagonist of a documentary, you know that it isn’t always easy because of everything we demand – which often involves a lot of repetition, staging and rearranging. 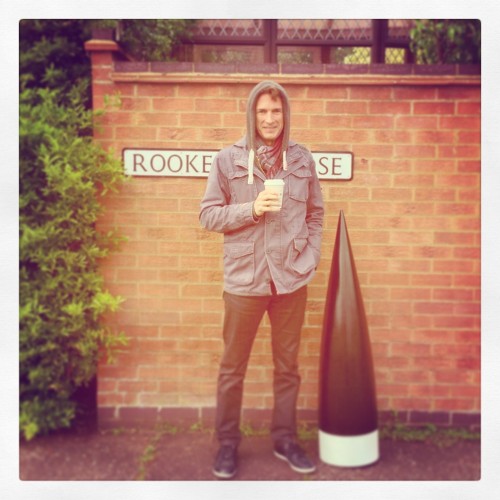 Director Robert Styblo being cool in Russ’s street – Rookery Close (we kid you not, that was the name of the street!)

Russ was simply great, and I recall him saying to us, “I am fully aware what you are after and I know that this will look funny on TV: An overweight man carrying the tip of a rocket down some way to narrow stairs. But I am going to do it anyway, because I want to see it too.”

When we left after the first shooting day, we had serious doubts that he would ever succeed in building his rocket in time. When we arrived two days later to pick him up and go to the event, we were amazed: Not only had he finished it, he was fueled by adrenaline to go to the event despite having slept only a shocking 30 minutes or so over the past one and a half days.

At the event, we got to see a lot of lovable characters who were totally in their small rocketry world – like a small tightly knit community where everyone knows everyone. Barbecues, families, children, dogs, jokes, fun, campers, building rockets. A world in its own. 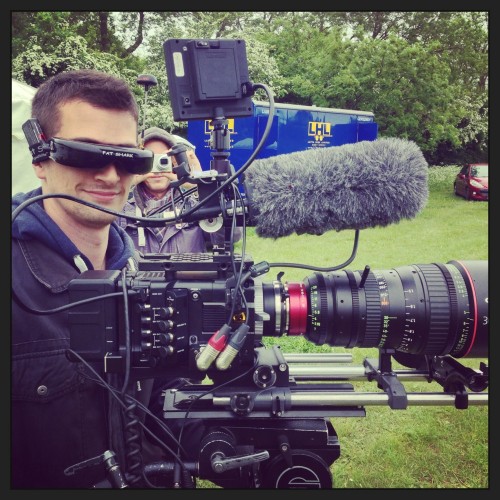 Me trying the drone goggles of some drone operator on site, for no other reason than to look cool (or weird).

Russ spent the day preparing his big launch in the evening, and there was still much to do. In the meantime we watched the kerfuffle on the site and met a lot of great people. Russ was getting a little more relaxed as the big launch approached – he knew that he did his best and that there was little he could do to change what was going to happen at that point. So he went with it – and it was a huge success, probably the largest rocket that field had ever seen. A beautiful launch of the 3 meter tall device, which went up 3 kilometers, textbook-like launch of the parachute at the highest altitude. 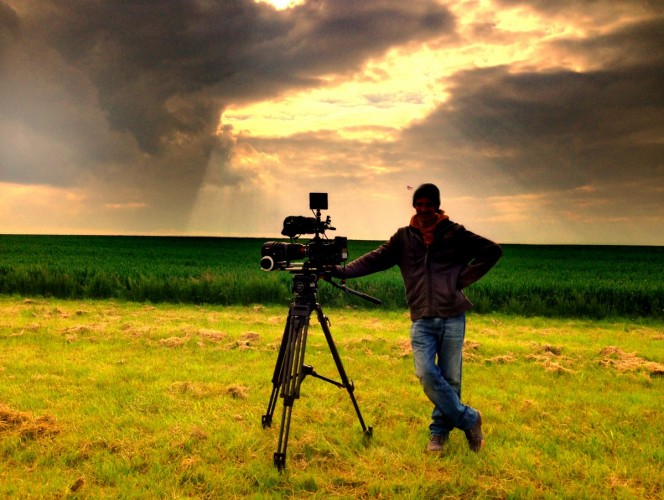 My shady (but awesome) AC Alois Kozar with the Sony F55, waiting for the rocket launches

And the best parts for me as a cameramen? Well, we put GoPros on the rocket – several of them. With the GoPro Hero 3 I was able to get amazing slow motion footage. We put the original sticky mount onto the rocket, with a GoPro pointing down – and as you can see in the video, you can see the thrust coming out of the rocket and lifting off at an incredible velocity. This truly is some of the amazing stuff I’ve ever been able to capture! We also put GoPros on other parts of the rocket, one pointing up, which beautifully captured when the 2nd stage of the rocket came off to release the parachute. Perfect!! 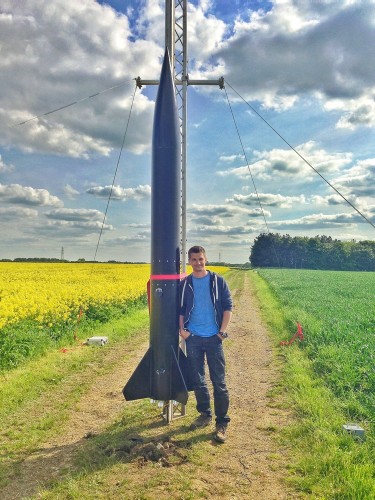 Furthermore, I was happy we had the small Canon 600D / T3i as a 2nd camera with us in our luggage, because the huge F55 rig with the 30-300 zoom was perfect for shooting the rocket launches from the ground, but an absolute beast to lug around the event site. Without the DSLR we would not have been able to capture Russ’s heartfelt tears and excitement after the successful launch, or the moment when we fell into his girlfriend’s arms. 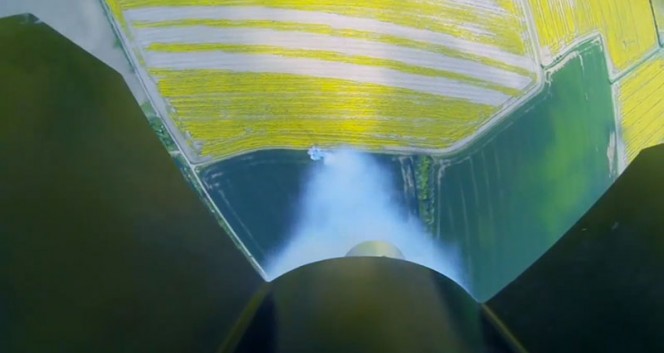 One of the most insane shots I have ever succeeded to capture: GoPro Hero 3 attached to the rocket, enormous thrust pushing it up in the sky, and it came down in one piece!

Overall, an amazing guy, a great incredible story, and the greatest team. What else can we wish for?

The next feature I will post will be a piece about the world’s fastest electric car (1,000 horse power!) which I shot in Croatia for TM Wissen with director Christoph Vieth. 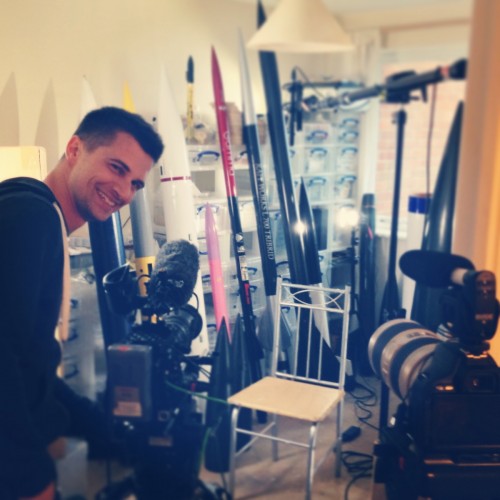 Ready for the interview with Russ! (Which you can actually only HEAR in final edit of the feature)