Film sets can be quite dangerous environments. For people who are not used to being on sets (believe it or not, those people do exist!), all the technology on a full-blown commercial set can be quite overwhelming at best, and hazardous at worst. Typically, when I have a client on set, we build them a little video village which gives them a chance to see what we are shooting on a dedicated client monitor. I do this in a small way even if the budget is tight (which is becoming the norm these days). 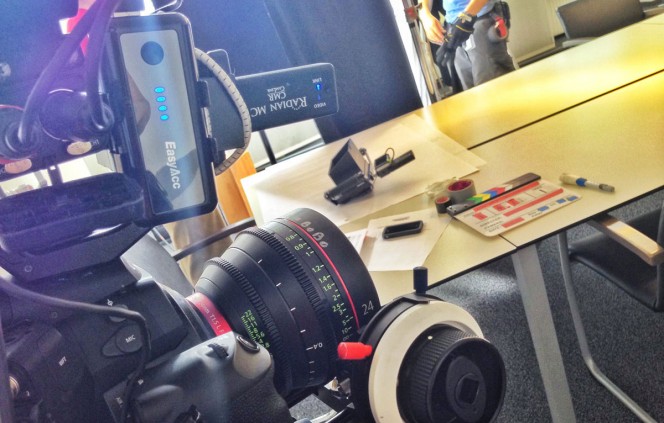 Radian MC wireless video transmitter on top of the camera on a recent corporate shoot.

However, “dragging” that little video village around from shot to shot and location to location can be a bit of a pain because of the wires from the camera to the monitors. When shooting on location it’s much worse because quite often there is simply not enough space to have a dedicated space for these monitors somewhere. On some shoots it is also impossible to use wires altogether because of the camera rig used. For example when shooting with my MoVi M10, the brushless gimble system that resounded through the land since it was introduced about a year ago, it’s totally unthinkable to run cables from the camera to a remote monitor because it would make it impossible to get stable shots with anything wired attached. The same is of course true for Steadicam operation and other mechanical stabilizers. 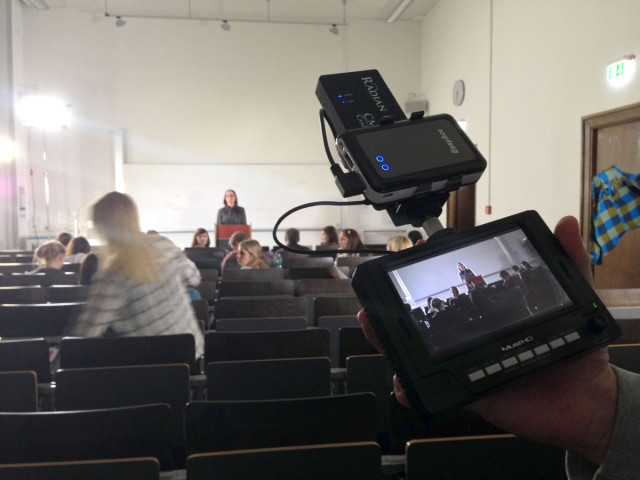 So, where does that leave us? Clients, agencies, directors and sometimes focus pullers need to monitor what is being shot in order to make the workflow on set efficient. Having a group of people peek over your shoulder as a cameraman doesn’t help anyone. Having wireless video is worth a ton … it frees the cameraman from literally a lot of strings. Up until a while ago, most solutions were quite expensive. Then solutions like the Teradek Bolt and the Paralinx showed up and suddenly those systems got within reach for many users. Wireless Transmitters – Radian, Paralinx, CW1 – why do they all look the same? The Radian Pro and Radian MC (stands for multicast) by Camera Motion Research (CMR) are some of the newer kids on the block. The Radian is a wireless video transmitter for the HDMI port that looks strikingly like the Paralinx, CW1 and the unicast Nyrius Pro. To be fair, they all look identical. So why is that? All of the products are produced under license from a company called Amimon, and the Paralinx, CW1 and Radian share the same hardware. The Nyrius is the cheapest of the bunch, also looks the same, but uses a consumer chipset from Amimon, while the other three use a pro chipset which is less susceptible to interference. Before I go more into detail, I can confirm that the Radian worked more reliably on a set than a Nyrius on the same shoot (a production in an environment with quite a lot of radio interference). The only wireless transmitter out of this bunch that uses a different hardware is the Teradek Bolt, but it also looks differently. 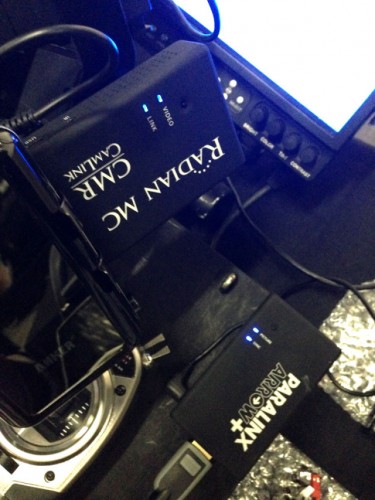 Differences and frequencies used The difference in the sets come with the frequencies used. Basically, the companies buying the hardware can program the firmware and used frequencies to their liking. However, without going into too much detail about that, this can make a huge difference. The permitted frequencies vary from country to country and some devices are not compliant in all countries – CMR assured us that they did their best to comply with as many regulations in as many countries as possible. That means the Radian Pro and MC should be among the most “legal” in the market. Radian packages Before we talk about performance and my experience on actual shoots that I used it on, let’s have a look at what’s in the box. CMR offers both a unicast version of the Radian (called Radian Pro) and a multicast version (called Radian MC). The multicast version can connect one transmitter to up to 4 receivers simultaneously. That’s very handy on sets where you have to satisfy both a director and a client, for instance. The packages also include a short HDMI cable, power cables for batteries (which are optional) and an AC adapter. CMR offers CamLink TX and RX Backbones, which are aluminum fixtures built to hold and house the sender or receiver as well as the battery that powers it. They have a 1/4 inch screw thread and come with the appropriate tools to mount it on top of virtually any monitor or camera in the appropriate thread or hot shoe mount. They also have optional cases for all the parts, which I thoroughly recommend because a lot of small parts are easy to loose. A nice add-on are the Director’s Monitor Yokes that they offer as well, which is a aluminum construction to hold the monitor and receiver (in a backbone), supported by two hand grips. I used this construction on two recent shoots and the directors and clients were thoroughly impressed by the setup – the yokes give them something to hold onto even in the most turbulent of shoots, I guess 😉 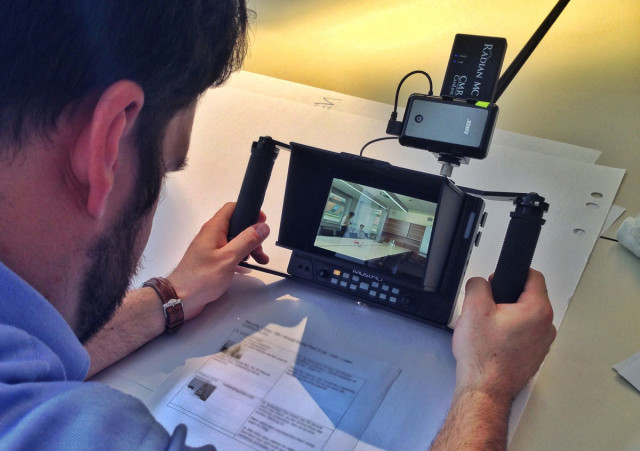 Powering and power consumption A nice fact about the Radian is that it can be powered using really, really inexpensive standard batteries with USB power outlets which are sold basically everywhere these days, because they are mostly used to power notoriously power hungry smart phones like the iPhones, when the internal battery is about to die (every iPhone 5 or 5S user knows that that means you are using it on a daily basis). There are 5600 mAh (for the sender) and 8400 mAh versions (for the receiver), which cost just about $30 each. I recommend to have at least two for the receiver and three for the sender to get through the better part of a shooting day (add another one each for a full shooting day). CMR sells the “Anker” brand of these batteries but there are some other names with the same or virtually the same housings (again) available elsewhere (e.g. “EasyAcc” on amazon.de). With regards to power consumption, the Radian MC doesn’t need a lot of juice – to me it seems like the sender unit needs a little more power, but also has the smaller battery attached (with the TX backbone, of course you could also use the bigger battery, but it’s not as convenient to have something that big on top of your camera or rig). I estimate that it lasts for about a half day of continuous transmission. The receiver unit lasted a bit longer in my tests. I never needed more than one and half small batteries for the sender and one large battery for one receiver unit for a full shooting day. And if you think about how cheap they are to buy, I think it’s a no-brainer to get additional batteries for the devices. 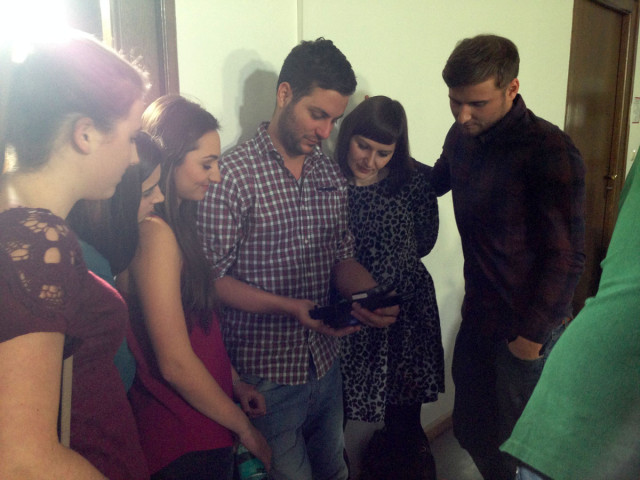 Range I compared the range of the Teradek Bolt, the Paralinx and the Radian MC sets and came to very similar results (even though the Teradek uses different hardware). If there are no obstacles between the sender and the receiver I was able to verify the advertised 300 foot (around 91 meters) quite accurately. The Paralinx, expectedly, had the exact same results as the Radian. With the Teradek it was about 10-15 meters less. However, as soon as there was an obstacle like a wall in the way, range dropped massively on all three devices. In a typical studio situation the maximum range of the Radian was around 25-30 meters with one wall in between. When the image drops, it drops quickly, typical for a digital signal. As opposed to analogue senders and receivers, there is hardly any loss in signal quality, it just gets some “hiccup” and then quickly starts working altogether when you’re out of range. So it’s basically “all or nothing” with these devices. The range is not far enough to operate drones with the Radian or the other devices – but it’s not made for that, there are other solutions which provide a much further range, and they are specifically designed for that purpose. 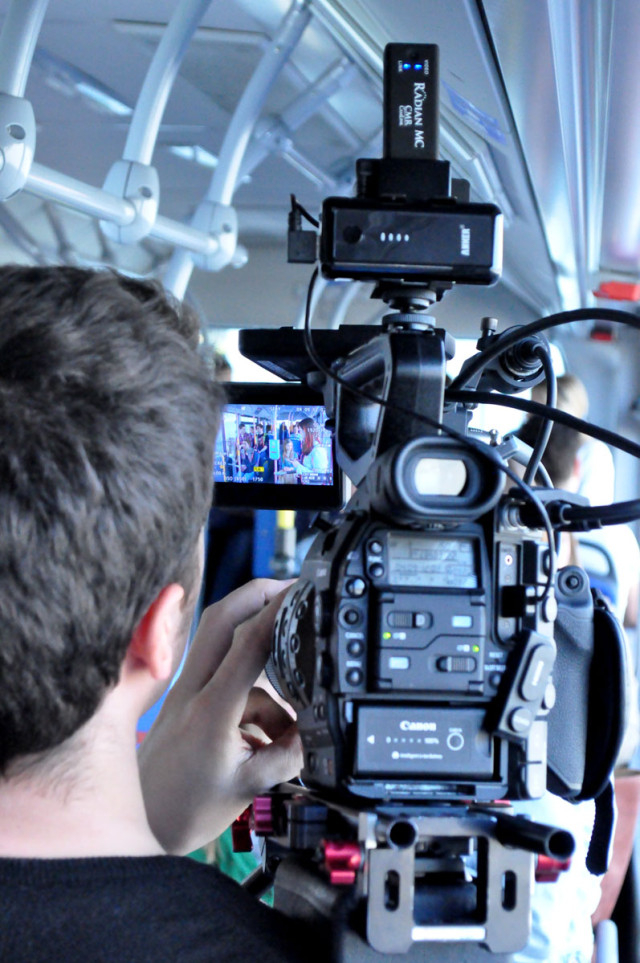 Me shooting a commercial on a moving (hired) bus – with the client sitting within the frame, back to camera, while watching the video through the wireless connection with the Radian MC 🙂

Operation Setting up the Radian MC was so easy I was wondering if I did miss something. Basically you just plug in the power from the batteries on both the receiver and sender, they power up and they will find each other within a maximum of 60 seconds – CMR pairs them at the factory already (that’s what the one tiny button and the remote are for – both of which you never seem to have to operate, ever!). During the power-up process the device figures out which frequency to use (if it’s free or if there are e.g. emergency services using the same frequency at the time), but then the pairing works very quickly and automatically. If you already have monitors attached to the sender/receiver units they will detect each other quickly and you’ll have an image right away. According to CMR, the one button on each of the sender and receiver units doesn’t need to be used in normal operation, it’s used for adding additional receivers and maintenance. So far I didn’t have problems with the connectivity, the sender and receiver units always find each other. Conclusion What can I say – you might know these moments when you introduce something new to your workflow and it “just works”. And then you wonder how you were able to work without it before … this is one of these occasions. From now on, the Radian MC will go with me on every shoot, because clients and directors love it and it’s that little “extra something” that keeps them really happy, because it also shows that you value their contribution as creatives / those who give you the paycheck. Of course it gives them more insight into your creativity and “how you operate”, but with the best result in mind, that should only motivate you as a cameraman. Also, the price is low enough it fits an indie budget (below $1,000 for the unicast version). The Radian Pro and Radian MC are available at B&H in various configurations, depending on the amount of receivers you need. Click here to see the full list. Here’s Camera Motion Research’s website.

Great system for the price, cheaper than Teradek Bolt and even smaller, which is great for gimbal systems. 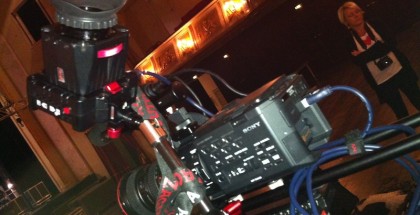