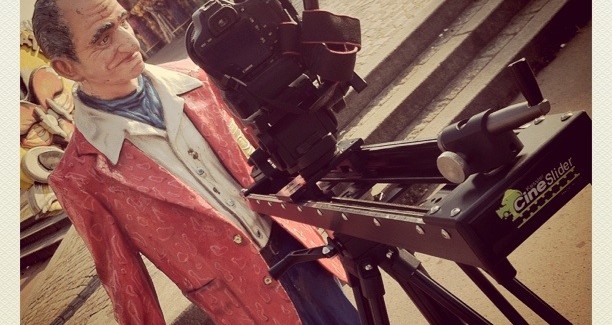 Before I go into detail about sliders and the Kessler CineSlider that I have reviewed in particular, check out his little test short that I shot a while back in Vienna’s famous “Wurschtlprater”, a luna park, months before it’s opening to the public again. The people in charge of the rides (there is no general admission fee, you have to pay individually for access to the operators’ rides) were testing their rides on this unusually sunny winter day.

Sliders are all the rave nowadays, and their appearance is not just a fluke, there’s a reason for their popularity: They still form a relatively new product category and simply allow you to bring smooth motion to your images, which is something that is relatively difficult to achieve using other affordable gear: Dollies cannot be used by one person alone and they are large, heavy and need time to assemble. Stabilizing systems like a Steadicam or Glidecam are notoriously hard to master. 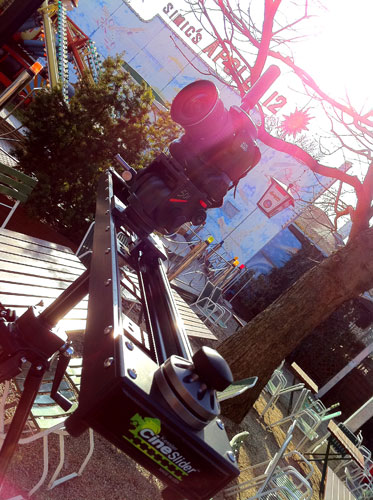 Camera sliders were born out of the thought that quite often, a little motion is all you need to make your images look more lively and interesting. In our time and age it has become common for most TV shows and movies to utilize consistently moving cameras, no matter if motivated by the action or not. If that is a good or bad thing is probably not up to my judgment, but it’s a fact that audiences’ expectations have risen enormously over the past decades, and if you want to add an additional quality to an otherwise boring shot (and I’m particularly thinking about commercial and corporate here, were having a consistent storyline is unfortunately often a luxury), sliders are the way to go.

I have used many different sliders over the course of the past few years, even before DSLRs became able to shoot great video. One of the first on the market was Glidetrack, based on a standard IGUS track (that you actually can buy at a home improvement store), with a sliding carriage on top. The original Glidetrack (which I have, the Glidetrack HD) was using plastic parts that slid over its surface, making it common that you get stuck with your camera quite often. I originally bought it to be used with my larger cameras, among them the Sony EX3, which is particularly front-heavy, making it even harder to use. It was a pain and I ended up using it less and less as it required up to 20-30 takes to get it right. It didn’t really get that much better than that with DSLRs and so I only used it when there was no alternative (like e.g. a real camera dolly on set).

More sophisticated sliders have been available for a while, especially for larger cameras and heavier systems, for apparently higher prices and also with less portability. Then along came KesslerCrane, and with it a consistently growing range of new products in the crane and slider fields, bringing with them a lot of new ideas that re-envisioned several of these products. Among them was the slider ‘genre’, and the CineSlider is one of their top-of-the-range models. 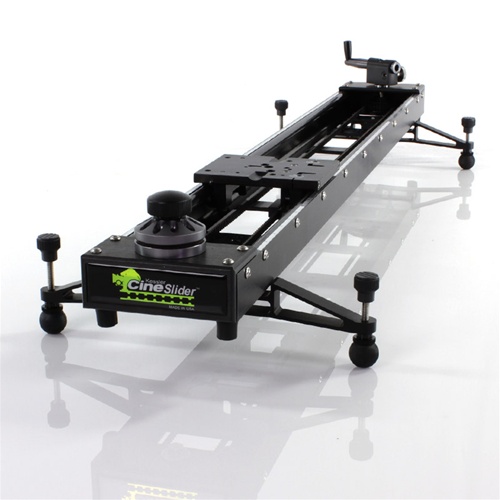 The first thing you notice when you get a KesslerCrane CineSlider into your hands is that it is extremely light and portable, despite its size (I got the 3 foot version, 5 is also available). The track is a custom design and it is quite wide, giving a very stable foundation even to cameras with a larger footprint. That is something that many sliders seemed to have missed, because they are usually not as wide. I have tried mounting several different cameras on the CineSlider, and it performed very well even with a Red One attached (if you decide to put on prime lenses instead of long zoom lenses, obviously).

The CineSlider comes with a standard Giotto tripod plate, which is a nice treat – so you could just go ahead and mount a camera on it right on the spot without an additional tripod head. Of course then you wouldn’t be able to adjust the position of the camera vertically as you wouldn’t be able to pan, but hey, it’s there for free, and it allows the slider to be used basically out of the box – also something which is not possible with most other sliders. 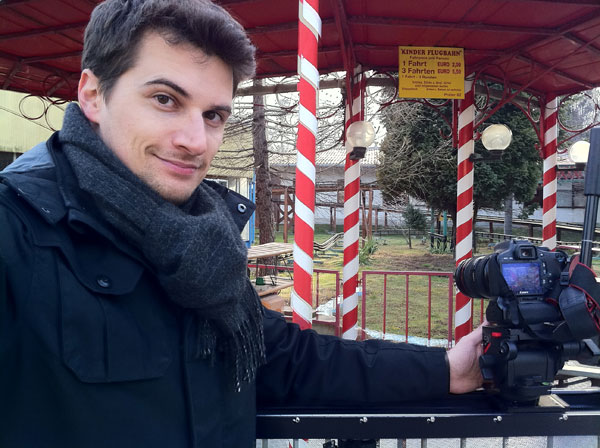 I personally have no use for a Giotto quick release plate and immediately replaced it with a half-decent flat mount fluid head (Manfrotto 501) – it’s good for very basic use and it was not at all easy to get smooth tilts with this head while moving the slider (for the test short AWAKENING), but I was not able to mount my Sachtler FSB-8 ball mount head on it without going down on it surgically …

In the end I decided to stick with the Manfrotto 501 as it is more representative of what people will use it with anyway – and I think the test short proves that the most difficult moves, very slow ones combined with manual movements on the other axis through the pan/tilt head, are indeed very possible to accomplish. As with everything worth mastering, time and practice is needed though. 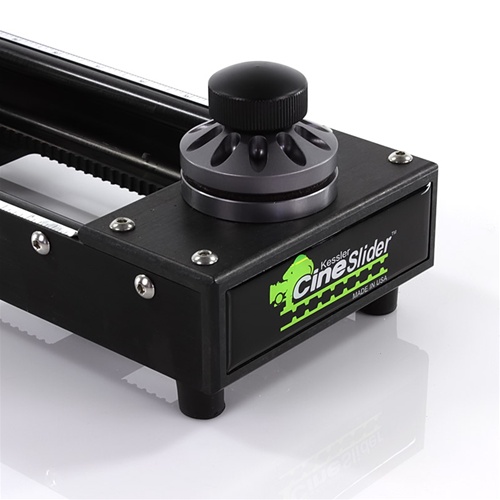 The drag control on the CineSlider is a very simple but effective way for controlling the resistance of the carriage. The carriages on most sliders need a certain amount of pressure applied to start sliding smoothly, but the CineSlider (and also all the other KesslerCrane sliders like the Philip Bloom Signature Edition Pocket Dolly and the “normal” Pocket Dolly) slides extremely smoothly with minimum resistance. You need to loosen up the drag control all the way to get the least resistance, which also allows you to perform the fastest and slowest sliding movements – which is notoriously the hardest thing to accomplish with a slider. Never before have I seen a slider that performs so well with slow movements as the CineSlider, and that’s where its true quality lies.

I personally prefer performing movements directly through moving the carriage (on which the tripod head and camera are positioned). However, it is also possible to use the crank handle, a custom design pioneered by KesslerCrane. By turning it faster or slower and changing its diameter (see their own PR video below), the carriage moves accordingly. Here too, practice is needed to successfully move it continuously and evenly, but it works nicely – if I had the choice between this way of moving it and the direct control by moving the carriage, I would still go with the direct control though, as subtle movements – to me at least – seem very difficult to accomplish by using the crank handle alone. 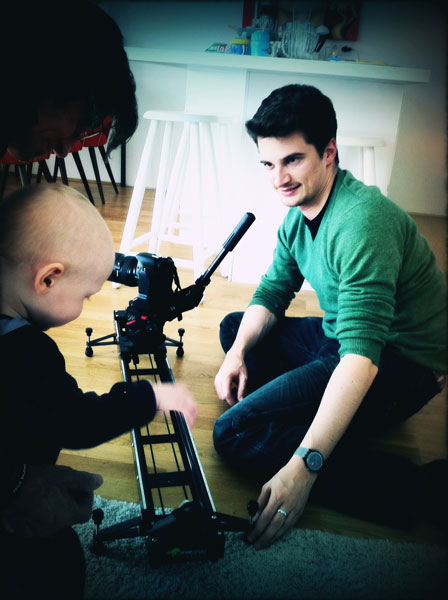 Filming my little nephew with the CineSlider, he was very impressed 🙂

One of the biggest advantages of the CineSlider is its upgradability to motorized remote control using KesslerCrane’s Oracle controller and ElektraDrive motor. Attaching the motor is surprisingly easy and can basically be done within two minutes by removing the drag control and replacing it with the motor – really straightforward. Unfortunately I haven’t had a chance to play with the KesslerCrane motion control systems and all the timelapse possibilities that come up with it, but I plan to review this additional kit in the future too. Particularly interesting would be a comparison between the KesslerCrane Oracle/ElectraDrive systems with DitoGear’s Omnislider, which I have been using for a while now. They are very different products but could be compared for their timelapse and motion control functionalities. 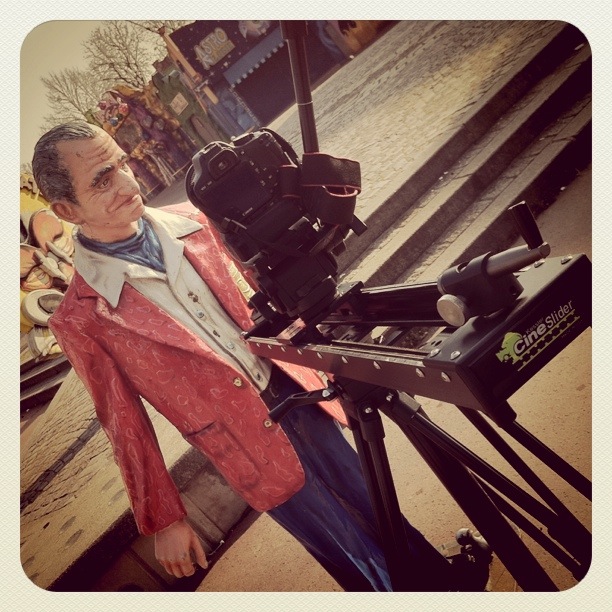 To make a long story short, I really think the CineSlider is an exceptional product and it is without exaggeration the best manual slider I have used to date, I am impressed with its performance and its built quality. The included Giotto baseplate is a nice treat but hardly usable for professional purposes and should be replaced with a professional pan head right away.

I am looking forward to testing the motorized capabilities of the CineSlider in the future.

Check out KesslerCrane’s products, among them the CineSlider, right here on their website. By buying through any of the links on this site I get a tiny commission which helps me maintain this blog the way it is now, and further – really much appreciated!!

I am affiliated with KesslerCrane because I think their products are very good, and therefore I think it’s perfectly fine for this blog to be supported by any purchases made through this site – which, by the way, helps me enormously to maintain posting in-depth gear reviews – it makes no difference for you, the price is still the same!

Frequent readers of this blog know that this does not change my position on products, I will still criticize what I don’t like. Plus, I am intentionally affiliated with competitors (in this case, both KesslerCrane and DitoGear). Therefore, for me it makes absolutely no difference if people buy one or the other, but it guarantees my independence. 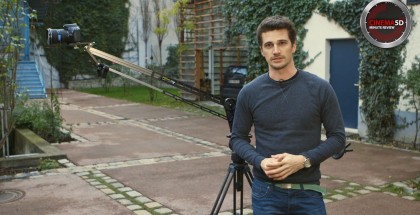 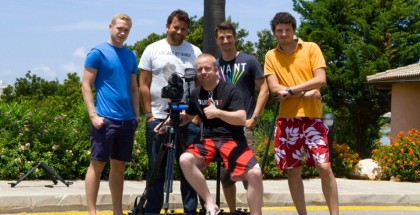 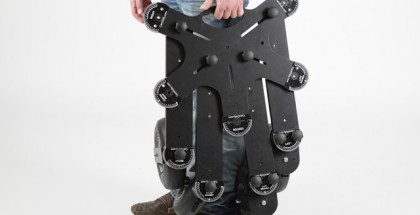